The Esopus Bend history is intimately tied with the history of the Saugerties community. A carriage trail along the most prominent rock outcrop was commonly used to enter the village from the south prior to 1830. The trail led to a scow or rope ferry across the creek to Stony Point, where wagon wheel cuts into the rock are still visible. A pontoon toll bridge briefly operated here in 1830-31. In prehistory, the preserve was likely used for fishing access by a large Indian population that spilled over the bluff into the flatlands of Barclay Heights. Here the young braves came of age, as they still do today. 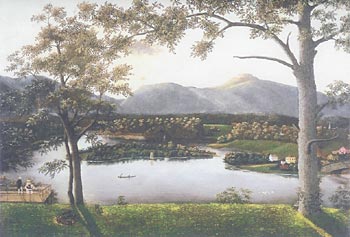 “View From Barclay Heights”
Charles Townsend, c.1851
Oil on Canvas (Print)
A record exists of an active recreational area year-round on the Esopus Creek along the two miles of Esopus Bend shoreline in the nineteenth century. “View from Barclay Heights,” the Charles Townsend Hudson River School-style antebellum painting, depicts guests in the boarding house along the Barclay bluffs enjoying the view. On winter weekends, villagers would fill the ice, with couples in horse sleighs, families out for a jaunt, races for the daring and youthful, even feats of strength and acrobatics, and booths with refreshments to suit the weather. Esopus Bend meadow was flooded frequently then, creating romantic nooks for ice-riders to dally. As late as the 1920s, the creek in front of Esopus Bend was still the goal for daredevil tobogganers from Nanny Goat Hill.

The Schroeder farm produced a wide array of vegetables for the New York City market. The vineyards and fruit trees were along the Esopus Bend hillsides, a large tomato field lay on the western slope, and corn and wheat grew in the floodplain. The farmer’s lanes now cross the animal routes in a web of Esopus Bend trails. Some timber harvesting also took place, but since 1970 the property was largely fallow. A recommendation by then assemblyman Maurice D. Hinchey led to the designation of Esopus Cove and part of the meadows as state-protected wetlands in 1982.

The land became a nature preserve in 2003 when the property was purchased from the Keyser family by The Catskill Center for Conservation and Development on behalf of the Esopus Creek Conservancy.

This article was prepared by Vernon Benjamin