Some of our devoted Esopus Creek Conservancy volunteers and Form Below

Volunteers are very important people at Esopus Creek Conservancy. In recognition of their contributions and accomplishments, ECC will feature outstanding volunteers on our website throughout the year.

The ECC board of directors voted unanimously to give its 2008 Volunteer Recognition Award to Chris Florsch for his untiring efforts, extraordinary leadership and many accomplishments on behalf of ECC during the past five years.

Florsch, a former ECC board member and current chair of ECC’s stewardship committee, leads the committee in developing and maintaining the trails throughout Esopus Bend Nature Preserve, restoring and maintaining the meadow, organizing volunteer work parties, and is largely responsible for the general day-to-day care of the preserve.

Florsch meets quarterly with stewardship committee volunteers on site, walking through the 161- acre preserve, planning new projects and identifying areas that need attention. His insightful stewardship is guided by an intimate knowledge of the preserve gained from a lifetime of excursions on the property.

Growing up in the Barclay Heights neighborhood of Saugerties next to what is now the preserve, Florsch, as a child loved exploring the land from the time it was the Schroeder farm. He continues to share his love of this special place with his two children – Kristin, a teacher in the ECC Environmental Program, and John who works on ECC projects. His two-year old granddaughter, Avery, often accompanies Florsch during nature walks on the preserve.

With spring here and summer on the horizon, Florsch and the stewardship committee volunteers are completing the South Bridge and starting a wetlands boardwalk to enhance the experience for the many hikers and nature lovers who visit Esopus Bend each year.

Florsch will receive the recognition award at a ceremony upon completion of the South Bridge. 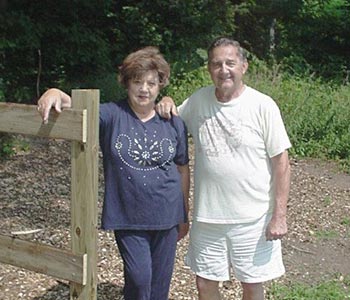 Two volunteers who work with the ECC have a very close relationship with the conservancy, not only in philosophy but physically as well. In fact, they live right next to the Shady Lane entrance to Esopus Bend Nature Preserve. How much closer can you get?

Joan and Chris Pappas have been consistently active with the ECC since the call for volunteers went out in 2004. Joan serves on the fundraising committee, and Chris does lots of photography and general upkeep on the Preserve.

Chris is originally from the New York City and Joan is from Peekskill, NY. Chris came to the Saugerties area in 1956 when he went to work as a technician for IBM. They married in 1956, settled in Lake Katrine, and then came to Barclay Heights in 1961. According to Joan and Chris, what brought them to Saugerties at that time was the affordability. Joan and Chris were the second family in the Barclay Heights development and chose their site because it was near the woods and the creek.

But it was not without problems. “There used to be dirt bikes and motorcycles in the woods. And it was a dumping ground. There were about a dozen cars down there that we took out. There were refrigerators, a bathtub, parts of a car and an engine,” said Chris.

Joan describes herself and Chris as “the gate-keepers.” “We have a motion detector light on the house so no matter who passes by at night, the light goes on. Plus we got a street light because I went to the board meeting one time and set that up and got it passed,” said Joan.

Joan’s work on the fundraising committee is considerable: attending meetings, selling the exquisite Charles Townsend Glicee reproduction print, A View from Barclay Heights, and the specially designed ECC T-shirts to help raise much-needed funds. “As far as Esopus Bend is concerned, I’d love to see the trails filled in and more trails made. I think that will happen. I’d love to see the footbridges go in. I want to see more hikers. I’d also like to see park benches along the paths so that the people can sit along the way.” Joan explained.

Chris photographs the various events producing home-made CDs about the Preserve. Joan and Chris also do clean-up – pulling weeds and planting. Chris takes care of mowing at the entrance to the Preserve. Reflecting on the other volunteers, he said “It’s been interesting seeing so many hard workers on the preserve; these guys are out there working in the heat, working hard.” Joan summed it up well: “We’re delighted for what Esopus Bend has become because for us it means peace; it means beauty.”

Now others can appreciate that peace and beauty at Esopus Bend because of the hard work and dedication of volunteers like Joan and Chris Pappas. 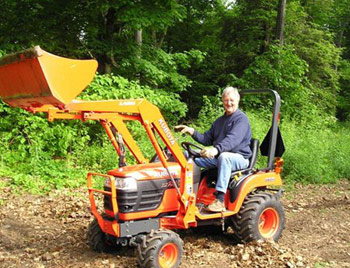 Ron Le Blanc is among the hardest working citizens in all of Saugerties. He served four years on the town board; and served on the school board. He was involved with the Saugerties Area Mobility Analysis (SAMA) and is on the recreation committee. .I’ve had my nose in so much stuff,. is the way Ron explains his community involvement. He applies amazing energy to his life and to his volunteer work which includes his service to Esopus Creek Conservancy (ECC).

But, first things first. At age 18, after one year of college, Ron joined the Air Force, where he served in the Air Research and Development Command for four years. Following military service, he returned to school, finished college, and went on to earn his master’s degree. Ron joined the Kingston school system in 1961 when he and his wife Suzanne moved to Saugerties.

Ron started his career in education as a teacher, then went to the central board where he later became assistant to the superintendent. While there, he wrote many grants to enhance the Kingston school district.s outreach efforts. But Ron decided to return to the classroom, eventually became a principal, the position from which he retired.

Recalling his first activities with the ECC and Esopus Bend Nature Preserve, Ron said, “I live on top of Hill Street, and I would look over at the property. We used to know it as the Schroeder farm. One day, I ran into Susan Bolitzer and knew she was trying to stop housing development over there. I did whatever I could to support the effort to stop that ….”

That was a success and Ron continued as an ECC volunteer serving as treasurer, chair of the stewardship committee and member of the board of directors from which he resigned about a year ago. In the early start-up days, there were some problems with teens using ATVs, but now, he says, “There’s no evidence of anyone being there other than hikers scuffing up the leaves on the trails.”

Though no longer a board member, Ron is an active ECC volunteer managing some construction projects at Esopus Bend. Ron said, “I try to support the work of the stewardship committee headed up by Steve Chorvas and Chris Florsch, because both Steve and Chris are knowledgeable about the outdoors. When we’re building a footbridge, they are the ones with the experience. They know where to place it, what’s growing around there, what to protect. They are sensitive to those things.”

According to Ron, the bridges are the big project right now. .One is constructed, and the other is a major undertaking because we have to span 50 feet. And the bridges are hard to construct because of all the materials that have to be brought onto the site. That’s the real serious task. The rest of it is maintenance – the trails and all that . which are less labor-intensive,. Ron said.

Ron is pretty well grounded in his wish list for the Preserve: He said, “I just want to see these general improvements that we’re now working on completed. I have enjoyed the people who are volunteers with ECC, and the many wonderful people I’ve worked with on the town and village level. The support from the town and the village has been wonderful for us, for the Conservancy.”

Regarding the current First Annual Fundraising Appeal, Ron says, “The Esopus Creek Conservancy provides an invaluable asset to the Saugerties community. I totally support this concept and am proud to associate with such an important endeavor. Esopus Bend Nature Preserve deserves the support of the total community. I hope that the current fundraising drive is enthusiastically supported..

Ron enjoys time with his family. He and his wife are the parents of four: three boys and a girl, all grown and working in Manhattan. Two even live there. Two others live in Long Island. Ron and Suzanne are equally proud of their six grandchildren: four boys and two girls. As far as personal interests, Ron has a wood-working shop in his home and enjoys making furniture for his family. He smiles and says “When I’m in my wood-working shop, I’m happy — I’m all set up to make sawdust.”

Ron, thank you for your volunteer work and dedication, and happy Sawyering.

In recognition of his service to the ECC, Ron received the 2006 ECC Volunteer Recognition Award at the Charrette Update on September 15. 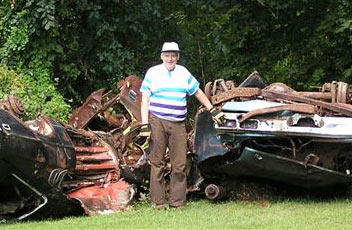 When ECC reached out in 2004 for volunteers, Ray Newton immediately got involved. He attended meetings with his wife, Cathy, to learn about the conservancy and its activities. He signed up for the April 2004 Clean-up Day, and helped with the arduous task of hauling out old abandoned cars and other discarded items from the preserve. Commenting on Ray’s involvement, Chris Florsch, chair of the Stewardship and Land Management Committee, said, “We couldn’t have done it without the help of volunteers like Ray Newton. Ray was there every day helping out until the job was done.”

Why did Newton get involved? Like so many other Saugerties residents, Newton believes in what ECC is doing. “The whole concept of creating a nature preserve in Saugerties is a terrific idea, and Esopus Bend is a neighborhood jewel,” said Newton.

The neighborhood he refers to is Barclay Heights, a residential area developed in the 1960’s. Newton, who grew up in central Pennsylvania, chose to live in Barclay Heights when he came as an engineer to work at IBM in Kingston in the early sixties. He did not want a city environment. That choice to live near what is now Esopus Bend Nature Preserve gave him an appreciation of the land and influenced his decision to become an ECC volunteer. Now retired from IBM, this active senior citizen said he has the time and the interest to help out. “It’s such a worthwhile effort and a lot of fun,” said Newton.

Newton is looking forward to the next important volunteer tasks at Esopus Bend – to complete trail work, post needed signage, and finish clean-up tasks on the property so it can be opened to the public.